I have a new book trailer for Burden that Rebecca Ethington made for me. I am so excited to share this with everyone. I hope you love it as much as I do.

Today's Throwback Thursday features His Haunted Heart. You can grab your copy HERE. If you subscribe to Kindle Unlimited you can find all of my books there.

She puts one foot on a chair and then before I know it, Embry’s on top of the library table.
“This is our one chance. It’s the one chance we’ve got to say we did it. To say we did even though they said we couldn’t or shouldn’t. Let’s go because our parents never did. Let’s go because we know the journey will change us. Let’s go because I don’t want to feel that sliver of regret lodged in my heart when I’m old and too tired to go.”
Instead of her chosen future profession of veterinarian, she should be a lobbyist or a full-time protester-if there’s such a thing.
It works, of course. Her little speeches always work. She’s talked us into so many schemes and plots that we all have records three inches thick. I’m surprised any of us are actually making it to graduation.
Everyone is sitting up, enthralled with her words and her charisma.
Beauty queen—she should’ve been a pageant girl.
No, she hates lipstick.

Who wants a bookmark?

I have TONS of The Lucent Series bookmarks just waiting to be given away.

Email me at: authorlilafelix@gmail.com and I will mail you one.

For this weeks Swoon Sunday we will meet Hayes and Rex in False Start(Love & Skate Book 5) . You can find the book HERE

“Do you want to take a walk,” I asked him.  He nodded and we walked outside. My mom always kept her yard just right and she grew Mayhaw trees in the back. My treehouse was in an old Oak tree all the way to the back of the property and I had a plan to fulfill my fantasy.  I pulled him by the hand and walked the winding stairs up to my round treehouse. My father built it when I was a girl and Hazel was too busy putting on make-up and dresses.  “It’s cozy,” he said, having to duck to get inside. “It is. I stayed here all the time and read. Sometimes I’d lose track of time and end up spending the night.” “Why? You have a great family. From where I stand, you’re damned near perfect.” Exasperated I retorted, “No one is perfect, Rex. No one. Please don’t call me that. Anyone who seems perfect is either faking it or unaware of their own sin.” “Do you have a knife or something?” He asked, his eyes on the trunk of the tree my treehouse was built around.  “Yeah, in the little pencil box.” I answered. He had no idea what he was asking. That was my secret stash of blades in there. Even my parents didn’t know about that stash. “Can I carve something in the wood,” he was bashful again.  “Yeah, what are you gonna do, ‘Rex was here’?” “You’ll see.” I knew what he was doing as soon as I saw the H and the M. I started crying silently. He had no idea what he was doing with just a few strokes of that knife. He was turning the object I used to self-inflict wounds to engrave something beautiful. I bet he didn’t know with every cut, he also carved a way deeper into my heart. “There,” he finally finished his masterpiece and moved back, proud of his work. The letters read H.M. & R.M. 4 EVER. It made me cry more. “Oh man, I made you cry. Shit. I can carve it away. If you hate me one day, just take a hammer to it. Maybe it will make you feel better.” “Don’t you dare carve that away,” I demanded through tears. “Come here. I didn’t mean to make you cry.” He dragged me over to his lap and situated me sideways on his lap.  “Give me this,” I reached for the knife and put it back into the box. I loved that knife before, for the pressure it relieved beneath my skin. But now I love it because it allowed Rex to replace a horrible memory with a beautiful one. “Tell me why you’re crying,” he used his thumb to wipe away one of my tears. “I’m falling for you hard,” I covered my difficult confession with a easier to swallow confession. He let out a sound of unbelief, “It’s too late for me. I think I’ve already fallen.” “You’re just trying to get me to make out with you in the treehouse.” “You doubt my feelings, lady?” He took on a Shakespearian tone. “No. I’ve never heard anything so heartfelt in my life.” “Good. Because it’s true. And I want to make out.” I’d never laughed so much as when I was with Rex. He wasn’t particularly funny in groups, but when it was just me and him, he was funny as all get out. Grabbing his collar, I pulled him down to me. He smiled before covering my lips with his own. One of his hands squeezed my thigh and I giggled into his lips thinking of the ‘no thigh’ rule the night before. I didn’t intend to give anything away before I was married, but it would be hard to deny Rex any part of me. I moved to straddle his lap and made a big deal of pulling his suspenders down one by one.  “I was hoping you’d do that,” he breathed onto my neck. And then his lips sucked and nibbled on the same spot, in the curve of my neck. I shivered, overcome by the sensation. It made him moan. “You can’t make that noise. It drives me insane.” He pulled back, “Bad or good?”
“Oh, very good.” I felt his smile against my neck, “I could eat you up, like cake.”

For today's Throwback Thursday we have Seeking Havok. Here is Chapter 1. You can find your copy Here

You can find all my books on Amazon

I thought I would update everyone about the Events I have lined up so far this year.

Booking in Biloxi will be on March 25, 2017. You can grab tickets HERE

Supernatural Con In New Orleans, LA will be on October 26-29, 2017. You can grab tickets and get more information HERE

I will be at the NOLA Para Fantasy Con in September. I will update everyone with when I get the date and time.


I want to share all of places you can stalk, well follow me to keep up with all my antics. I will be sending out a newsletter soon to update everyone on my new projects. 2017 is going to be a busy year for me and I am looking forward to sharing new stories with you.

As you know I did finish Beholden and its available now. That was the final book of the Bayou Bears Chronicles. If you would like a copy you can find it HERE.


Thank you all for your continued support.

Lila's Rink Rats (This is my fan group)

I am beyond excited for WizardWorld Comic Con in New Orleans this weekend. If you are in the area come see us at booth #1237. I hope to see you there. 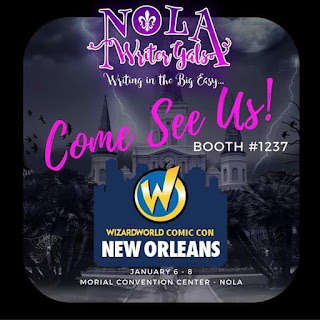 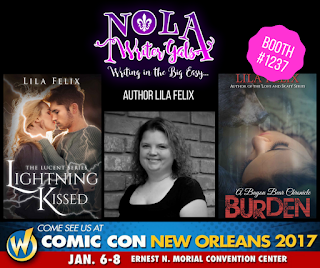