I am happy to say Tipping The Scales was released last night. It is my first dragon shifter book with Delphina Henley. I hope you enjoy it! 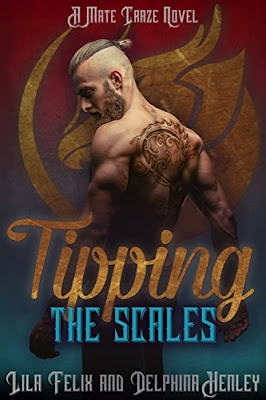 Kallie
While most of my peers were traveling south for summer break, I headed north with a dual purpose; earn a free ride to law school and clear my grandfather’s name. Nothing was going to steer me from my mission. Nothing. Except something did. Knox. Hot, kind, and talented Knox.

I am the alpha of our clan. My responsibilities run far and wide and until recently I did them impeccably, until the Mate Craze set in. I was quickly spiraling and the only thing that could save me was her: Kallie Theron. My true mate. One problem: she’s human and on track to uncover things that could harm my clan.

The thing that draws them together could tear them apart…

When Kallie, along with her friend Rhi, goes to Castleton to research her grandfather’s death, she has no idea what she is about to stumble upon. Kallie has entered a town of dragons and their alpha is her true mate. Not that she has any idea why she is so drawn to the man who caught her eye and stole her dreams from the first time she set foot in the town almost a year earlier. She is, after all, only human.