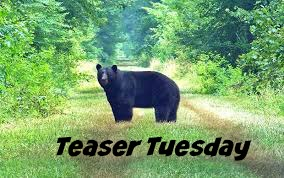 Its Teaser Tuesday so I thought I would give you another sneak peek from Beholden,

My bear wanted me to march over to her house as her car pulled up in the driveway, demand to know what took her so long and scan her for bruises or cuts—because that’s all he cares about—where she is—if she is okay—and—you know.


To tell the truth, I kind of wanted to do that too—without the roaring. He wanted to roar at her—thought it would be the bear version of manly.


I don’t think she would concur.


Slinking behind a tree, I try not to be noticed watching her like a big fat stalker. I watched as she got out of the car and took a long deep breath and released it. She was home okay and not visibly scarred.


“I see you Aspen—whatever your last name is.”


I took a chunk off of the tree, clunking my head against it. She didn’t even know my last name. It’s like we don’t know the basics about each other, but I’m already in deep shit.


“What?” She yelled and I refused to move from the tree.


After removing the shards of bark from my forehead, I walked over to her but instead of answering her question, I posed my own brought on by the stench that aired around her.